My fascination for all things old actually started when I was very young but I began collecting antiques after the Navy while working at a power plant in the Midwest. With five to six monthly farm auctions, I became a regular and started supporting my habit by wholesaling to antique dealers as a “picker.” I could buy a box lot of Depression glass for $10!

One of my most memorable buys took place at a farm auction in 1976. I saw a hay wagon (8 to 10’long by 8’wide) piled three feet high with vintage clothes. I was a bit shocked when I got the bid at $700 for all the clothes including five 1920’s and ‘30’s beaded flapper dresses, hundreds of elegant ‘30’s cocktail dresses, Victorian pieces and some threadbare farm clothes. I ended up wholesaling most of it to a shop in Chicago for $10-$15 apiece; many of the same pieces would now value $500 each. Not only did I find I could make a living at what I really loved doing, but I felt I had a part in preserving history after the auctioneer told me he discovered the farmer getting ready to set fire to the whole pile of clothing assuming it was junk! Rather than ‘pick’ for other dealers, I moved to California and became an antique dealer myself.

It was other antique dealers who started referring to me as the Antique Answer Man when they brought me what they found for valuation. The name stuck when referred as a speaker to glass collectors, Civil War buffs and antique societies. The actual transition from antique dealer to full time antique appraiser came after a stint on public television where someone would bring an item and I would appraise it on inspection, a local Antique Road Show type of programming. Want to know if the plate your grandmother gave you has more than sentimental value; or what time period and the market value of an old painting or photograph; or how much insurance to put on your collection? I make my living answering these types of questions with written and verbal appraisals. I am honored to work with the Crocker Art Museum and with other Northern California historical societies but the best is working with individual collectors or someone who has a ‘find’ and doesn’t know if it is valuable or not. Since antiques and fine art are so diverse, a lot of my time is spent on research. I hope what I continue to learn will be interesting to you as I pass it along through this blog. You can also check out my website: www.AntiqueAnswerMan.com.

HOW TO TELL PRINTS FROM PAINTINGS

At the latest Appraisal Clinic for the Crocker Art Museum I saw many interesting pieces.

The Wayne Thiebaud piece was particularly interesting as the Crocker Art Museum had just the night before given a lecture on this famous Sacramento Artist. In the lecture they described how in the beginning of his career he set up a few easels and sold paintings at the State Fair. Then the next day a lady brings in a wonderful Silk Screen painting of his, that at the age of thirteen she bought at the State Fair in the mid to late 1950‘s. Which was obviously worth considerably more than the few dollars she originally paid.

How to tell prints from paintings
As so often is the case I had several people bring in pieces they thought were original art pieces, either lithographs or paintings, that were in reality prints. It can be hard to tell the difference when you do not know what to look for, so I thought I would try to give some examples to help. 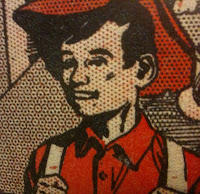 The picture at the left is an early doutone print used from 1880's to the mid 20th century. Two photographs were taken thru a screen with the screen slightly moved for the second photo. These were then printed in two different colors, one on top of the other. If you look close you can see the slight square shape the screen leaves to the dots of color. This technique was expanded and is the basis for most 3 and 4 color modern  prints.
The picture to the right uses several mechanical print methods. On the face and hands variable sized dots of color are used to shad the face, hands, and hat. The background shows a common modern mechanical print with a typical “flower” or dot in circle pattern. Many modern prints have this pattern, some with the colors of the circles being different or shaded but showing the same general pattern.
These are some of the most common color print methods that with a decent magnifying glass are easy to detect. And hopefully this can help you avoid buying a print you think is a watercolor or other original art piece. Now there is nothing wrong with prints. In fact many modern artists are selling limited edition prints as the major part of their art sales. However, if you buy these be sure they are a signed limited edition with a number designating how many were produced. Usually shown as 1/100 with the first number being the number of this print and the second being the total number made. The lower total made, the higher the value and the last print made is usually worth more than the first. (The opposite of engravings where earlier pieces bring the premium price.)
Chromolithographs are another confusing color print technique but are easy to explain. Dots of solid color are laid down one on top of the other. With the shading being the overlapping of various amounts of colors. This technique can make very bright vibrant colors that from a distance look like a painting. Early Maxfield Parrish prints are an example of the quality of this technique. Some of the early Chromolithographs used fairly large dots and thus are easy to see up close, even with the naked eye.
Posted by Antique Answer Man at 5:56 PM 1 comment: